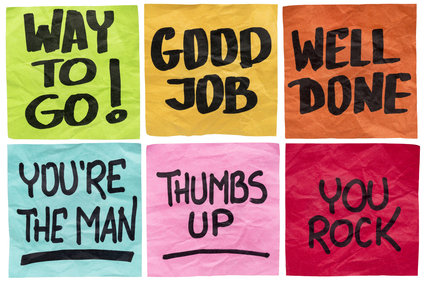 This week I’ve had several conversations with clients and their management teams on giving feedback.

The giving and receiving of feedback is probably one of the most vital skills in management.

According to Ken Blanchard: “Feedback is the breakfast of champions“

The aim of any feedback is to motivate and encourage more of what they do well, and identify areas where there’s room for improvement.

But, many managers shy away from giving feedback for fear that it won’t be accepted, that they will be challenged on it and put in an awkward situation.

Feedback can be badly received when it’s:

The main reasons for giving feedback are: Motivational when you are giving praise for a job well done and developmental when you want to see some improvement.

An effective feedback model is A I D

This approach is based on fact rather than your personal interpretation, so removes any subjectivity and the potential for conflict.

Here are the three key situations for giving feedback within the workplace.

This model works equally well in all three.

If it can be argued with it’s poor feedback!

Report on your observations. What did the person do?

If you’re feeding back on something that’s been reported to you through a third party (e.g. a customer complaint) focus on what the customer said rather than your interpretation, or the customer’s interpretation of what this means.

For example: instead of saying “you were rude to that customer” (which is someone else’s interpretation) you might say “I’ve had this feedback….” And then state what the customer said. You can follow this up by asking for their view of what happened.

What impact did their actions have on the result?  This is the reason you’re giving the feedback, because of the end result whether good or bad, or on the process itself e.g. the amount of effort needed on their part to achieve the result, or the impact on others, etc.

Do differently or Develop

Remember, the purpose of feedback is to enhance performance and motivate.  So, this last stage is important to determine what happens next e.g. develop to make it even better next time around, to correct a mistake or to perfect a process.  Putting the emphasis on what is missing (rather than what is wrong) builds on strengths or positives so is far more likely to engender enthusiasm.

Limit the number of actions you comment on to a level they can handle – far better to give feedback on one key action that they can digest and build on to make a difference, than ten things which leaves the message diluted (and invariably leaves them demotivated).

The more you can involve the team member in the conversation the better.

Use open questions to encourage them to tell you as much as possible, rather than you telling them. For example, you might tell them what your observations have been, but ask them what led to this, what the implications might be and ask them to suggest how they could do things differently in future.

When all is not well and the prime focus is on under-performance it’s easy to dilute the main message. If you need an improvement, make this clear. Starting and ending with praise (often referred to as the ‘praise sandwich’) can help keep it positive, but can detract from your main message if your intention is improvement.

Given in a constructive way feedback can not only improve performance but can raise morale, build rapport and promote initiative.