The more authority and skills you give your team, the better.

Where I stayed last week I had a very noisy room. I reported this to reception on arrival, but they assured me the noise would stop when the kitchen extractors went off. They didn’t go off. I called again and finally the extractors died down, but still there was far more noise than was acceptable for a good night’s sleep. The net result was moving rooms at midnight.

Now why couldn’t this have been dealt with when I arrived? Not only did it mean a frustrated guest, but lead to more work for housekeeping as now two rooms needed servicing instead of one, and added costs.

I suspect either a lack of training for night staff in dealing with complaints, or lack of authority.

Giving your staff authority to deal with complaints and unplanned situations enables them to resolve issues quickly and with minimum fuss. Great for the guest and less effort in the long run if staff don’t need to find you or a manager. Telling a guest you don’t have the authority to deal with an issue is both frustrating for the guest and degrading for the team member.

There will naturally be situations where a manager’s input may be required, but aim to keep those to a minimum by ensuring that any one of the team can deal with the most common issues, questions or complaints.

Authority and skill give your staff a sense of responsibility, so they take more initiative in other areas. It means you don’t have to keep an eye on things 24/7, in the confident knowledge that guest service will always be the best it can be.

Delegating responsibility and authority is key to effective leadership. Hear more on leadership questions and answers in my recent tele seminar Leading for Peak Performance

“Stop letting your customers walk away” 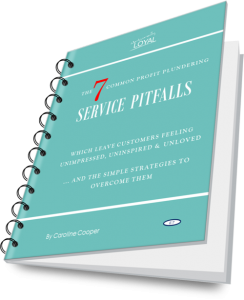