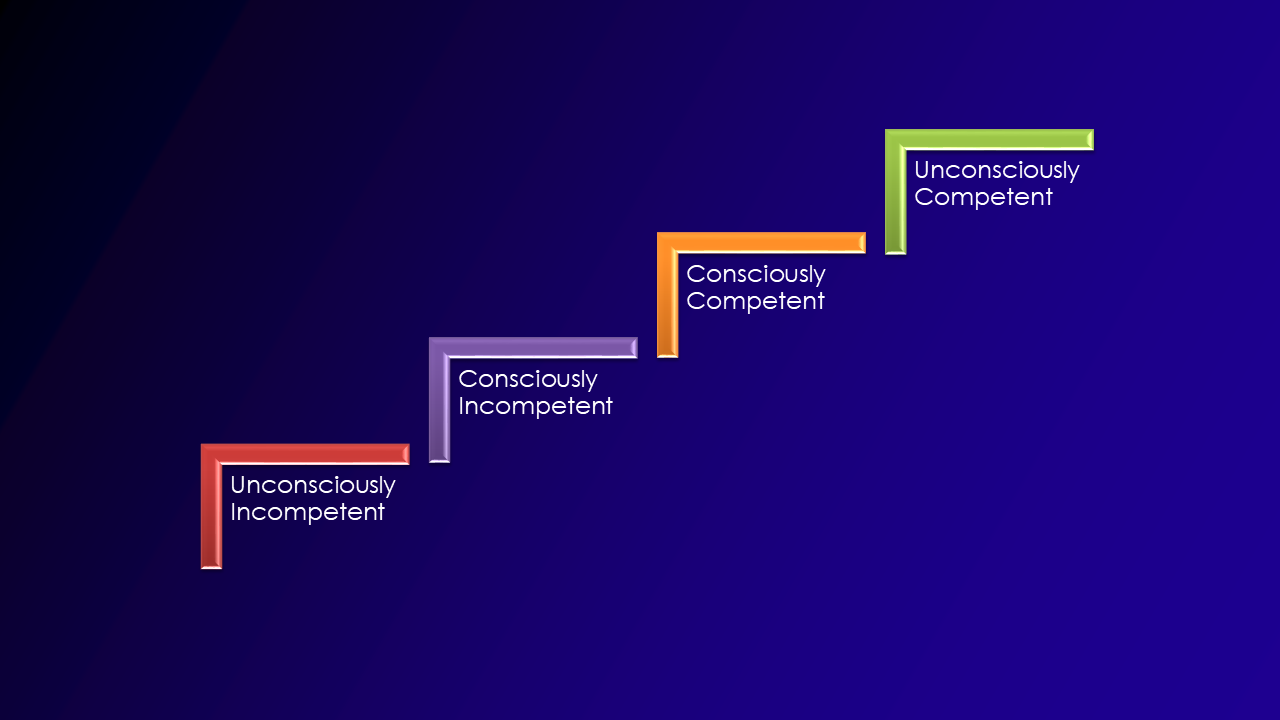 Have you ever had the task of changing the behaviour of one of your team members who thinks they know it all? I think we’ve all encountered such people who are blissfully unaware of their lack of competence. This is when we need to create conscious incompetence.

These are the four stages people go through when they are learning something new.

It’s not possible to jump stages, so when helping people learn something new we need to help them to get to the next stage.

When I’m working with clients to develop management, training or customer service skills there is often an assumption the people I’m working with are already at stage 2. In other words it’s assumed that they already recognise any shortfalls and the need for change or development.

But sadly they’re often still at stage 1 – unconscious incompetence – and not yet aware of any need to develop a new skill or behaviour. Trying to teach somebody something new from this point is a key reason so much training fails!

For anyone to learn something new or change their behaviour there needs to be some motivation to do so. Particularly when it requires some effort on their part. Without that recognition they will not be receptive to learning and the barriers will go up thinking “this doesn’t apply to me”.

In some instances people may previously have been at other levels but have regressed to an unconscious incompetence over a period of time.

From conscious incompetence they may simply have forgotten what is involved.

From conscious competence they may just have got rusty through lack of practice.

Or from a position of unconscious competence they’ve been doing it so long they’ve picked up bad habits. (I think here as an example of many people whose driving skills have lapsed into something verging on dangerous simply because they’ve picked up poor driving habits without being conscious of how bad the driving really is!)

This can present a challenge for us at times, as to undo a bad habit and replace it with a new habit can be more difficult than creating new habits from scratch.

If somebody believes they’re already doing something well this can be a sensitive area (who ever likes to have their driving criticised?!)

One (potentially risky) way of doing this is waiting for something to go wrong. And this is often what is used to prompt training. For example, in the case customer service training it might be after a customer has received poor service and complained, or in the case of management skills it might be when a manager fails to get the response he expects from a team member.

It helps knowing the outcome or standard you’re aiming for, then comparing this with the employee’s level of performance. (Of course we must recognise this isn’t necessarily always a training need; it could be a number of other reasons which I’ll comment on another time. But let’s assume this time it is)

So by now we recognise a learning need, but maybe the individual doesn’t. We shouldn’t assume the employee recognises that shortfall; they need feedback to highlight the gap.

It might be advisable at this point want to steer away from the language used in the model; being told you are incompetent in a task is hardly likely to motivate or engage an employee!

The learner might now be conscious of their ‘incompetence’ or training need but still needs to be motivated to do something about it. This might be created by highlighting its relevance to their role and why it’s important.

The better the person understands the training need prior to any tuition, coaching or training beginning the more enthusiastic they will be to even turn up for the training.

Making change when people believe they do this already

How to move beyond conscious competence